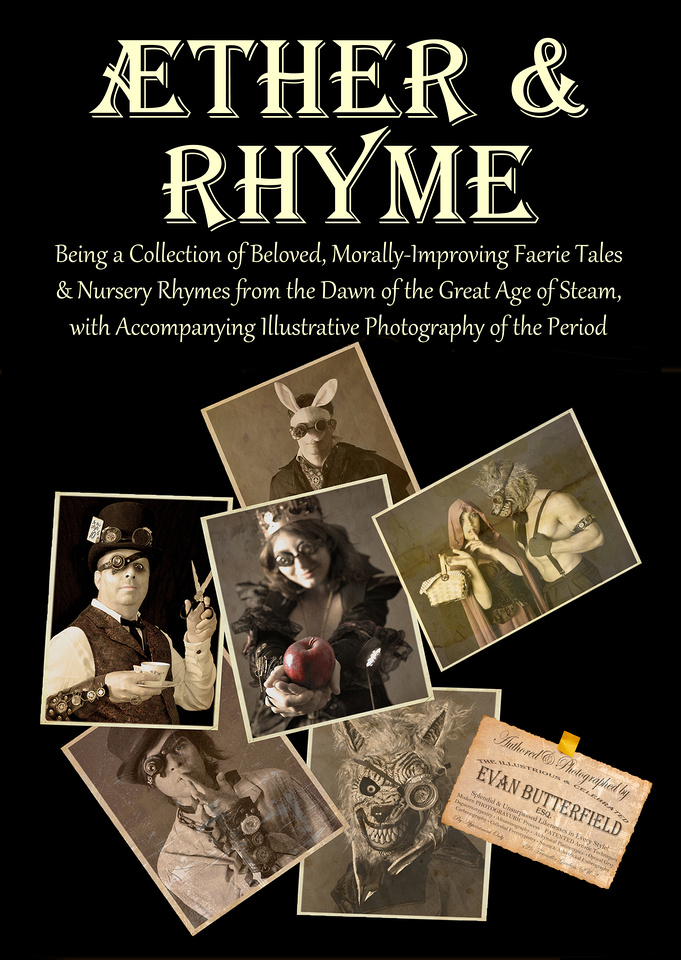 AETHER & RHYME is a unique collection of Steampunk versions of traditional nursery rhymes and fairy tales, with original Steampunk-style photographs. The book masquerades as a collection of tales and poems from a (fictional) children's anthology published "at the dawn of the Great Age of Steam," and features historical and critical footnotes in an arch-Victorian style that provide glimpses into the culture, politics, technology, and history of this alternative world. (The Notes, authored by a learned Professor of Practickal Literature at the Imperial University of the Useful Arts, provide occasionally helpful and enlightening (but more often obscure and peculiar) elucidation and scholarly analytics. Infused with a good bit of dark humor in the text, notes, and photos, "Aether & Rhyme" paints an fragmented picture of a strange, dark, slightly mad, somewhat wonderful, and alchemically-tinged Victorian world of brass and gears, steam and aether, alchemy and pneumatics, Babbage Engines and the new aelecktricity. The tales embrace Victorian and Industrial Age morality lessons with a slightly disturbing enthusiasm. (Note that despite its conceit, this is probably not really a book for young children's bedtime; much depends, of course, on the child.)  AETHER & RHYME Includes seven Steampunk-infused tales based (more or less) on traditional children's stories:  Little Red Riding Hood (What happens when a Modern Young Lady encounters a furry rogue in the Deepdark Woods); The Tale of Peter Rabbit’s Father (An original prequel to Beatrix Potter's classic); Rapunzel (Revisiting the "witch" and the poor imprisoned girl with the famous hair); The Three Little Pigs (The swinely trio flee the City's evils to live off the land, and encounter a Wolf who may have the higher moral ground); The Frog Prince (An object lesson in being careful who you kiss); Snow White (A rather different take on the traditional story, and an opportunity for the footnotes to take over the tale); Alice in Wonderland: The Cheshire-Cat (Re-telling an incident from Lewis Carroll's novel, in which the obscure Cat explains why everyone's mad).  AETHER & RHYME Also features seven Steampunky nursery rhymes with extensive alt-historical context:  Lazy Miss Muffet (On the perils of sitting on one's tuffet); Little Jack Horner (No Christmas pies or plummy thumbs here); Old Mother Hubbard (What was in the cupboard was, in fact, the cause of all the trouble); Mistress Mary (Not a common flower-girl); Jack & Jill (Bonnie & Clyde in Dickens' London); Wee Willie Twinkly (Sometimes new technologies have unanticipated consequences); There Was an Odd Woman (She lived in a town called "Ashoe," and is definitely odd).  In addition, AETHER & RHYME includes photographs illustrating seven other rhymes and stories that we are told appear in the original book of nursery stories ("Old Shellduck's Tales") but are not included in this critical collection:  Beauty & The Beast;  Cinderella;  The Muffin Man;  Hansel & Gretel;  Jack & The Standpipe: The Giant;  Alice’s Adventures: The Mad Tea-Party; and  Peek-A-Boo.  The photographs feature models with appropriately Steampunk'd costumes and props, with a weathered and aged look that lends credence to the book's basic pretense. If you enjoy Steampunk, alternative history, dark and twisted steampunk photography, satire, slightly bent fairy tales, and the lampooning of stuffy scholarly criticism, AETHER & RHYME  is for you!