Revisit the World of Steampunk Beefcake! 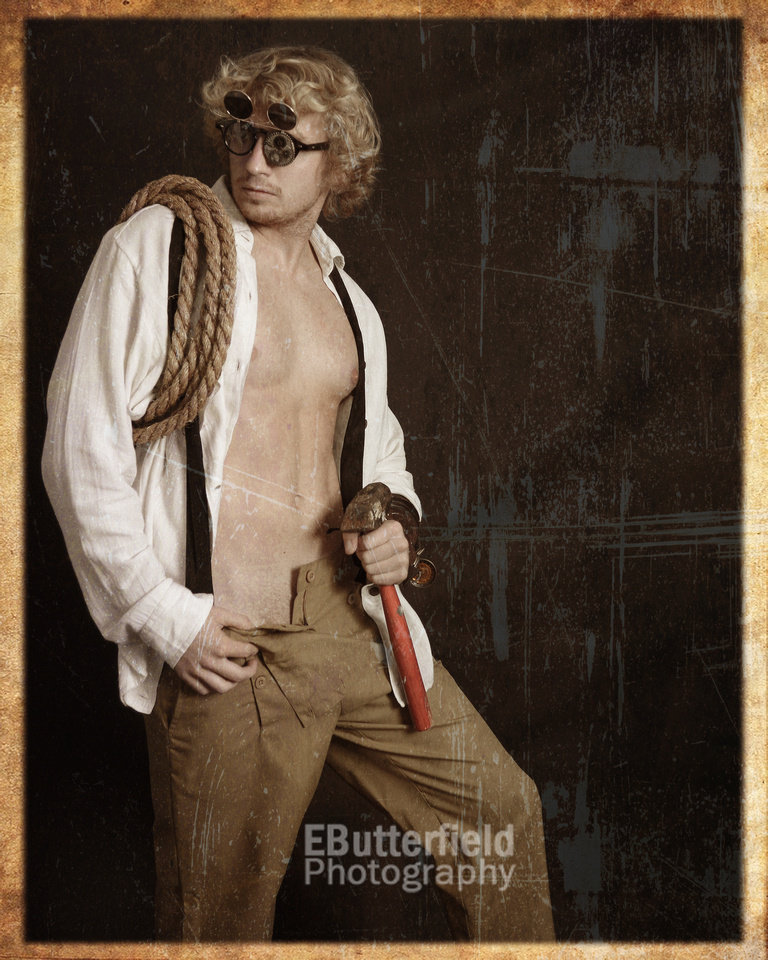 Cinaede Artifex StansWhile commonly known as "cinaede artifex stans" due to photographer Luxet Tenebrae's handwritten notation on the verso, the individual in this photograph has been identified as also appearing in numerous other works of Tenebrae in other costumes and engaged in other activities including gentlemanly, scientific, and military. These appearances strong suggest that the individual depicted is a model, and not an exemplar of Tenebrae's "found subjects," and so may or may not be either a cinaede or artifex.

Gentlemen of Steampunk II is over 75 pages of diverse muscular masculinity decked out in goggles, elaborate inventions, antique tools, and Victorian costume in photos made to look like something someone forgot in a 19th-century drawer someplace. 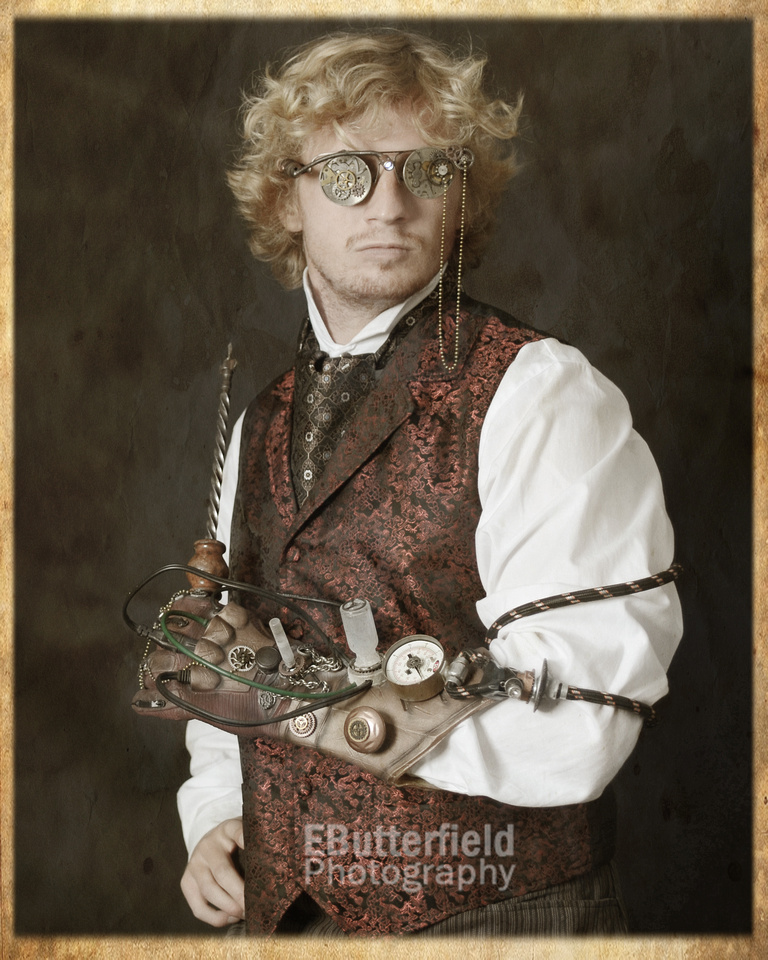 Yurick's Mechanical HandThe utility of the patented Yurick Aetherdrive Mechanical Hand is demonstrated by its inventor, Eli Yurick. Relying for independent power on a small compressed-aether ampoule (supplemented with an additional vapour-battery) and driven by a portable steam-engine, the Mechanical Hand was capable of a degree of dexterity and fine motorized motion that in most cases was the equivalent of, if not superior to, the wearer's natural appendage.

Ten utterly fictional gentlemen of the Steampunk era are profiled in this unique collection of "beefcake"-style photography, a companion to a previous, similar collection (conveniently entitled Gentlemen of Steampunk). 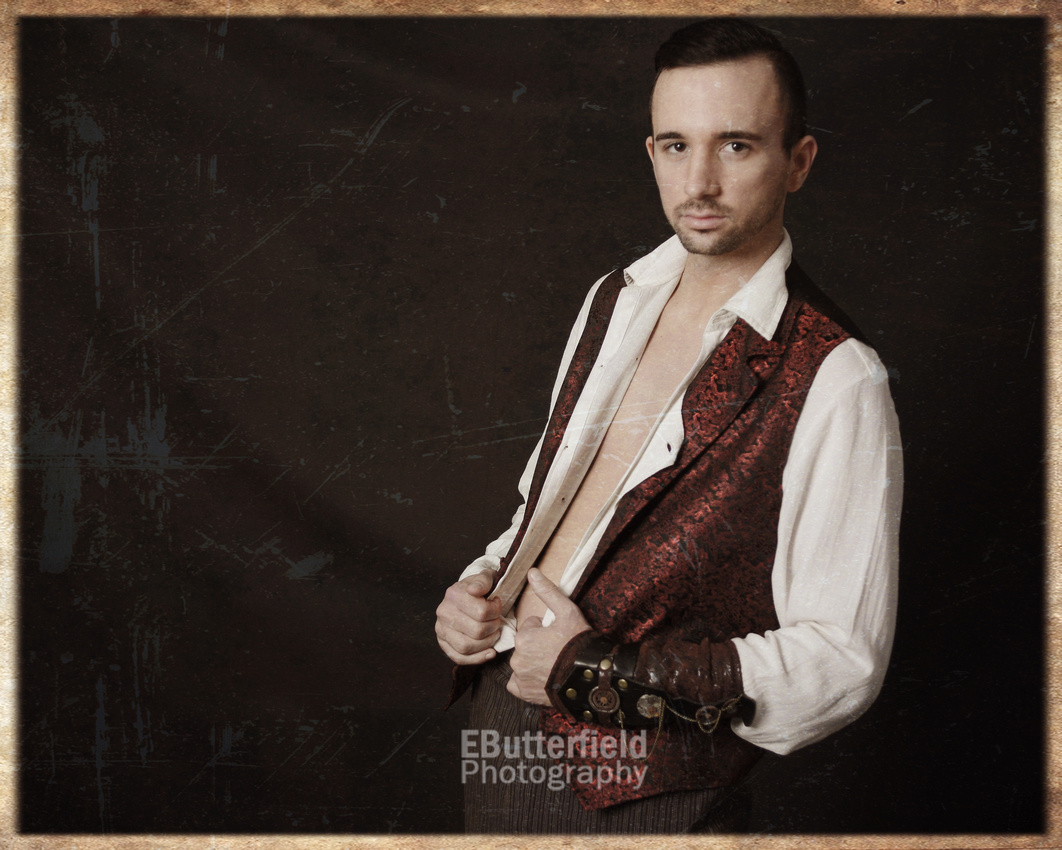 Masquerading as an archly-Victorian historical review of the founders of an alternative modern Steampunk world, the characters include poets and inventors, politicians and murderers, all woven together in a strange and slightly disturbing version of a Victorian England that could have been...but probably wasn't. 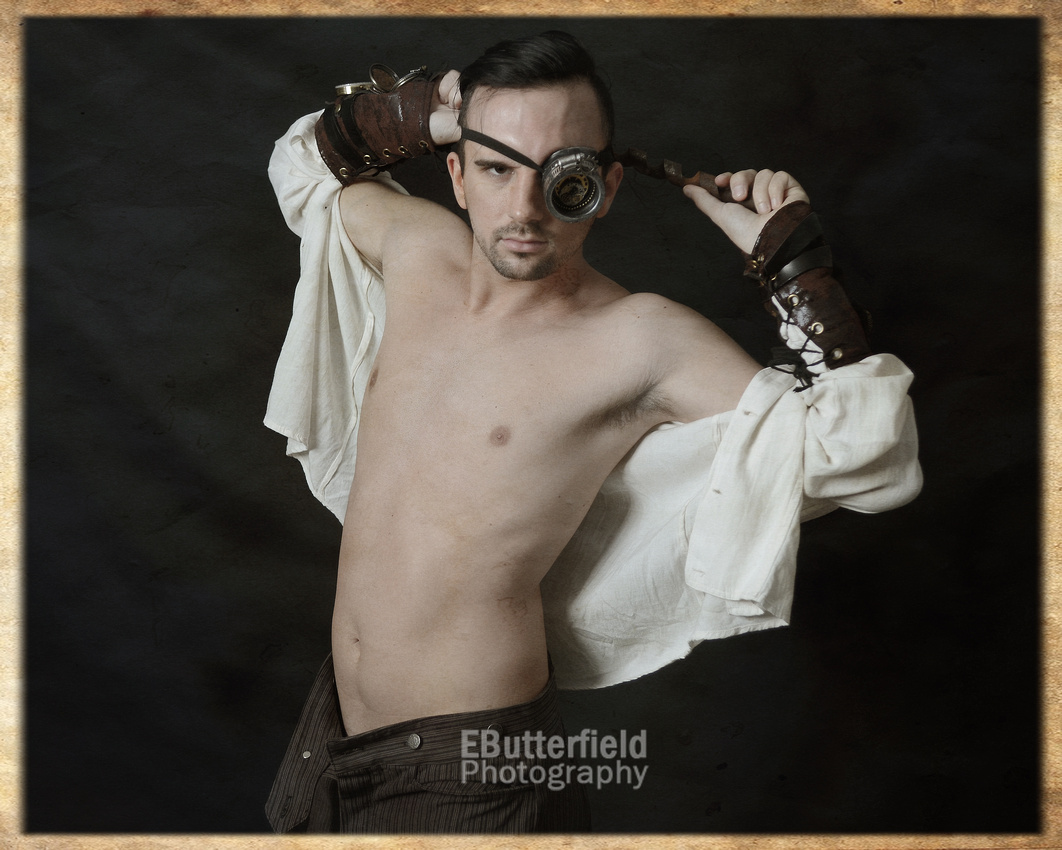 The photographs that form the heart of Gentlemen of Steampunk II feature a diverse collection of attractive, fit men, accompanied by detailed biographies (with detailed historical notes that hint at a much richer history) that make this faux-historical book a must-have for afficionados of quirky alternative history, Steampunk sensibilities, cosplay, and battered "antique" photography of scantily-clad attractive human males. 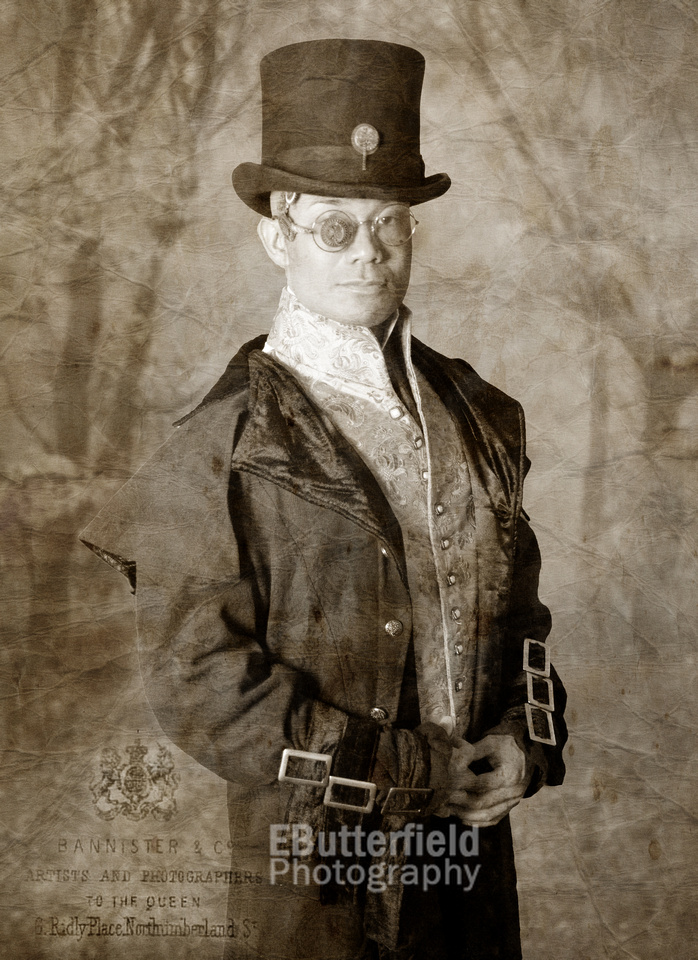 Steampunk Gentleman in the Woods

Gentlemen of Steampunk II (available in both a print and digital editions on Amazon) reflects an alternative history that runs on steamtech and alchemy. Each character has a short yet convoluted, vague yet suggestive back-story that hints at the rich depths of the steampunk universe. 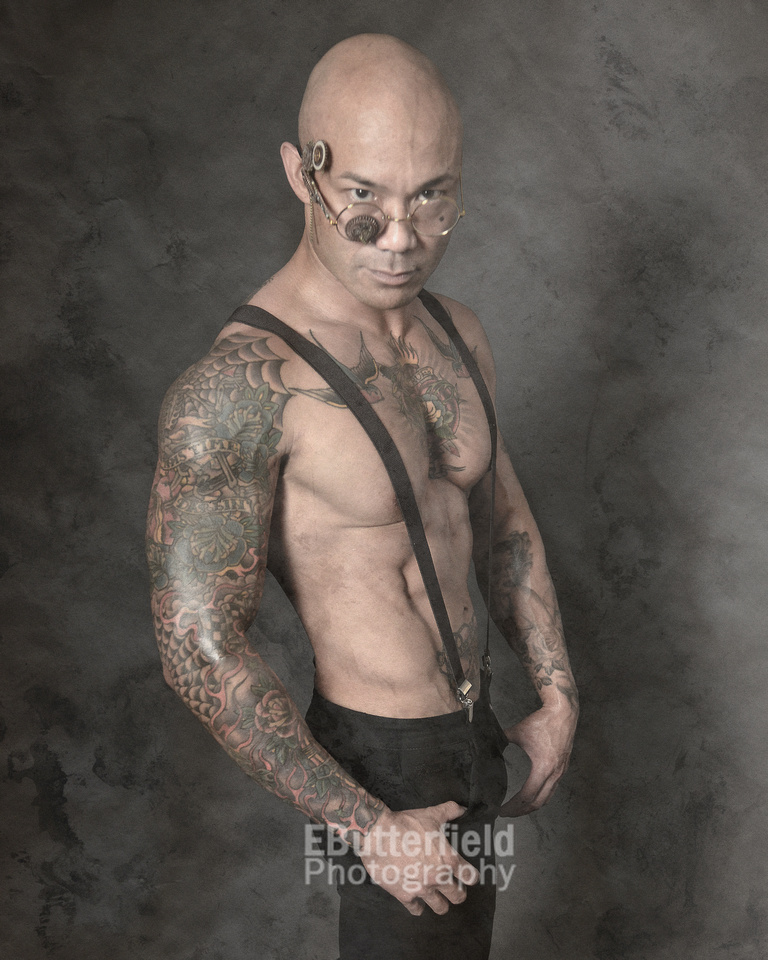 Imagine a Vernian/Dickensian mash-up universe powered by steam and gearworks and practical magic, where pistons and brass and iron take the place of plastics and microprocessors, and where Queen Victoria serenely rules an enlightened empire of advanced thermal and aetherial technology as fleets of vapor-trailing dirigible locomotives ply the skies. Now imagine that world populated by brilliant inventors and rascally rapscallions...who are also male models who forgot to put on their shirts that morning. Welcome to the Gentlemen of Steampunk II! 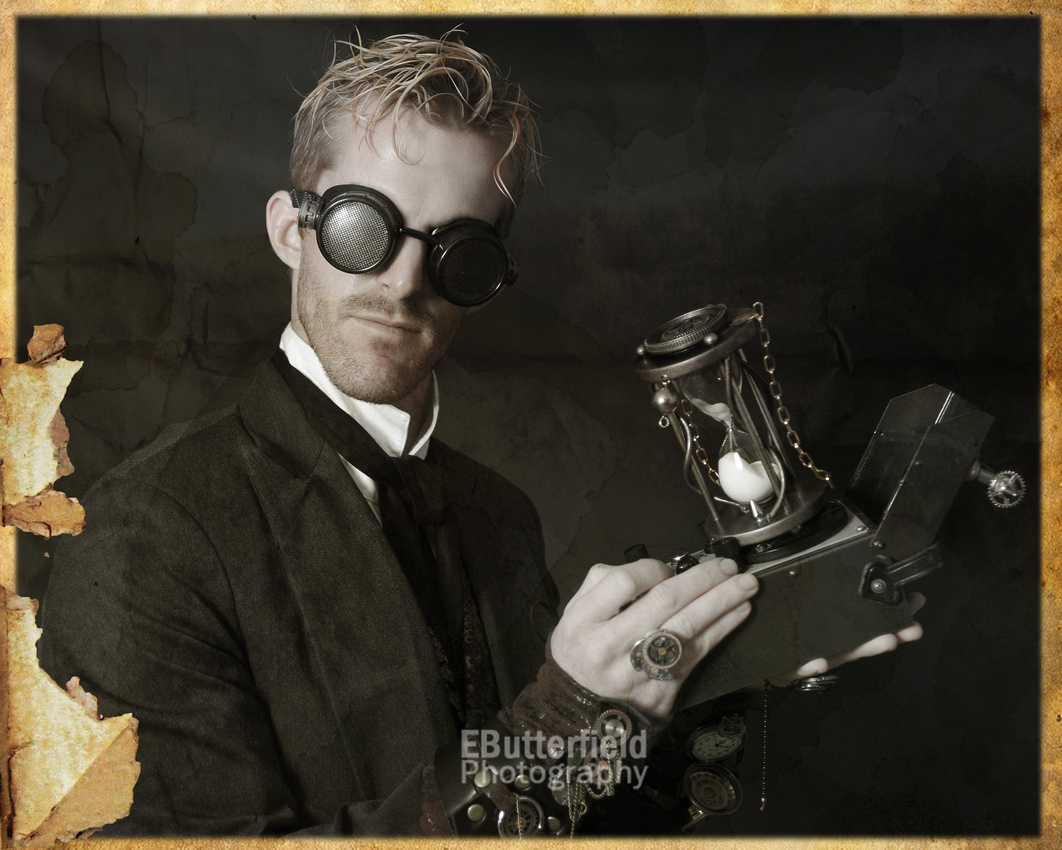 ...And Don't Forget the Original Gentlemen!

It has come to my attention, the more time I spend in the glorious and wonderful subculture of steampunkery, that there’s a significant thread of something not altogether modern about the neo-Victorian mindset.

Specifically, in the world of steampunk photography, it has quickly become obvious to me that the preferred aesthetic is comprised of upper-class white men with fantastical firearms and busty upper-class white women in corsets and not much else. (In point of fact, actual Victorian women, while perhaps overly susceptible to the vapours, women’s complaints, and occasional fits of dithering over whether or not the incident with the handkerchief in the hedgerow really meant something or simply meant something (oh yes, I’m looking at you, Jane Austen, with your misplaced billets-doux and ambiguous hankies) rarely went out and about having forgotten their skirts.) Google “steampunk” and sort by “Images” and you’ll see what I mean.

In short, much of steampunk art that depicts persons tends to depict persons in a thoroughly stereotypical, traditional gender-roled, male-centered manner. Now, while this may be in keeping with the general notion within steampunk of the need for–within the context of the fantastical alt-hist that’s been created–verisimilitude to the point of obsessiveness (steampunk crafters have told me the specific season of the specific year their clothing represents, and are sticklers for eschewing fabrics and sewing techniques dating after 1890). That only goes so far, though, as I am personally keenly aware: my more Wildean inclinations would, if we’re being strictly versimilitudinous to the Victorians, land me in hard labor for the next ten years, so let’s not get carried away. The simple fact is that steampunk is artifice, a history that is being created and told and spun out by steampunkers all the time. I bloviated on about my vision in the first two paragraphs here; others will have very different stories to tell. But all of it magically blends together into a subculture of Steampunk, and we have control of that subculture.

Here’s the thing: I am second to none in my admiration for a woman in a corset (well, OK, maybe second to some). But something in that cheesecake, pinup aesthetic has always struck me a little…not fair. Now, I am not opposed to depictions of strong, brilliant, adventurous women looking fabulous, but when all the strong, brilliant, adventurous women appear to have cascading bosoms and an aversion to clothing, I have to wonder just a bit about why that is. I think (to get theoretical here for a moment) it’s not dissimilar to the way female superheroes are depicted: in ridiculously restrictive and inefficient costumes that expose a lot of skin (see, e.g., Wonder Woman, Catwoman, Batgirl, Laura Croft), whereas Batman, for instance, is covered from head to toe in more armor than King Arthur. So there’s a cultural thing going on, and it bothered me (just a little bit), and I thought to myself, “Someone ought to do something about this. And then I thought back at myself, “hey, stupid.” So I was going to do something about it...

Sample photos from the FIRST Gentlemen of Steampunk book 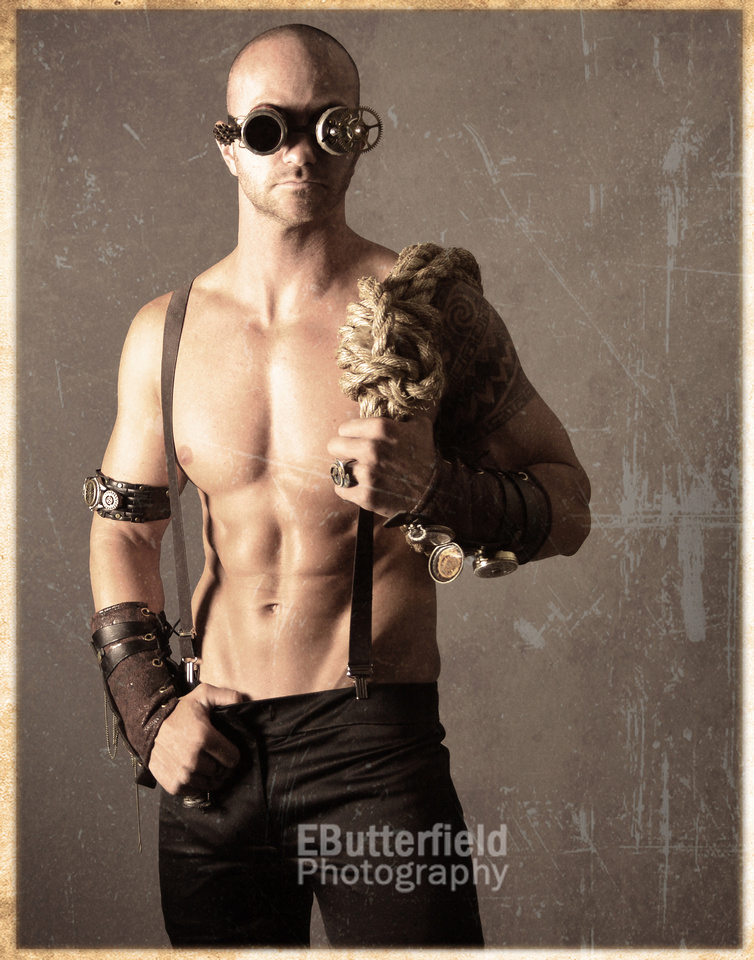 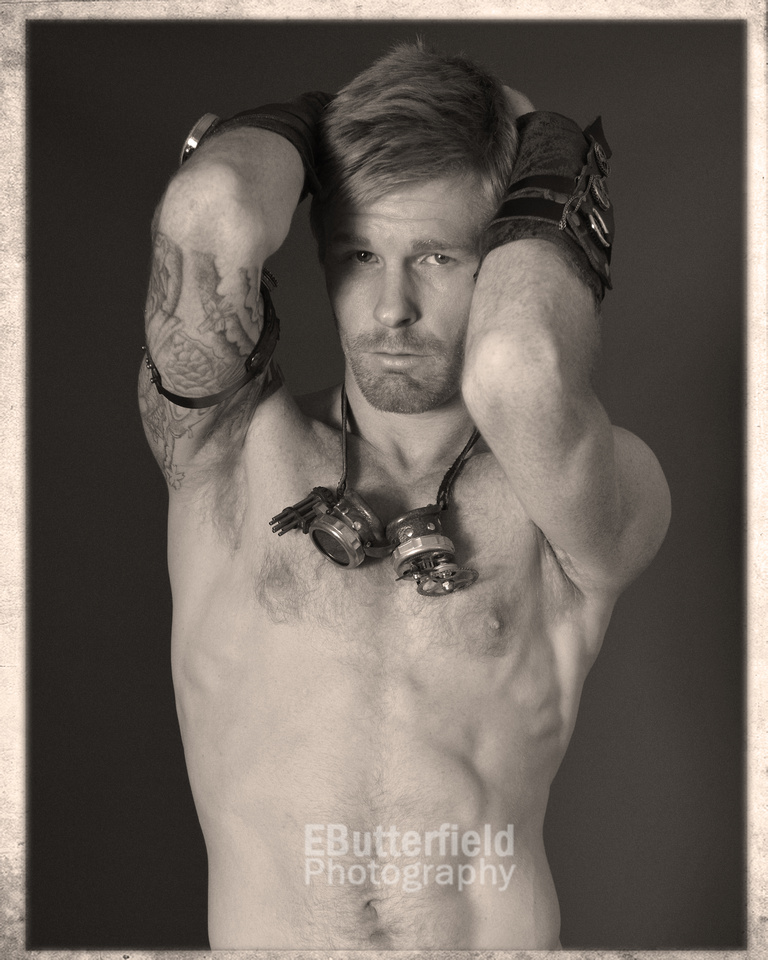 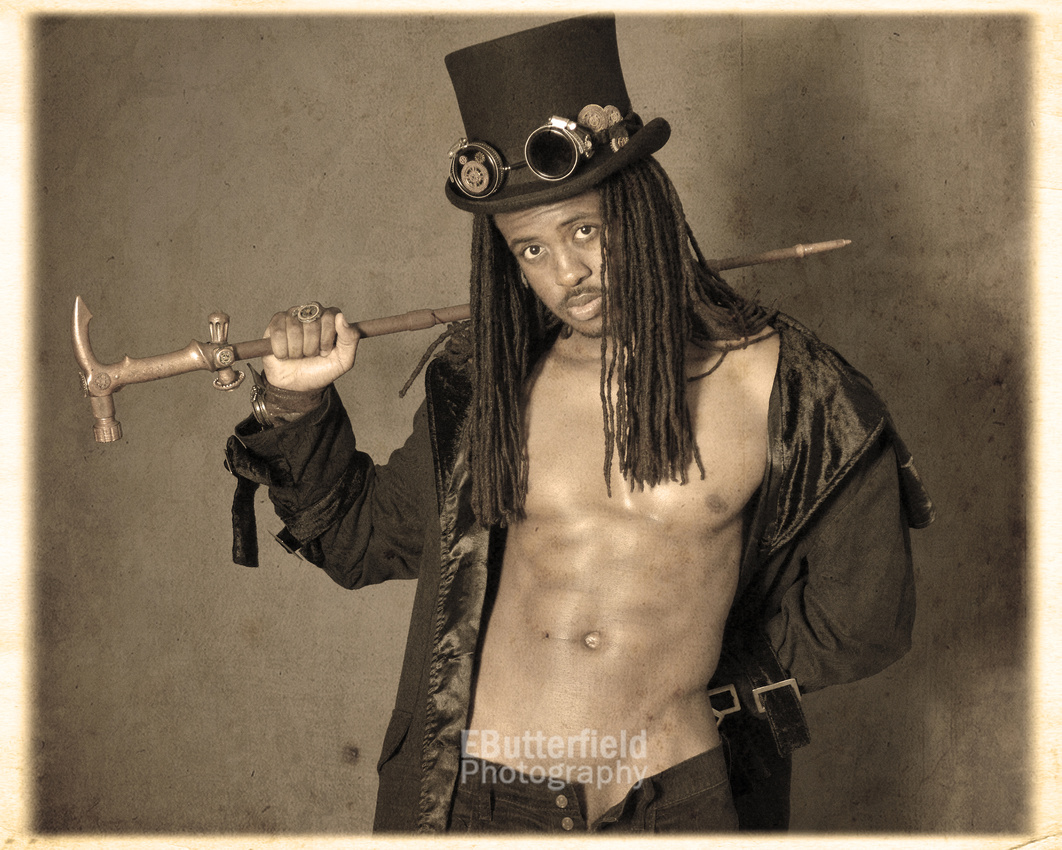 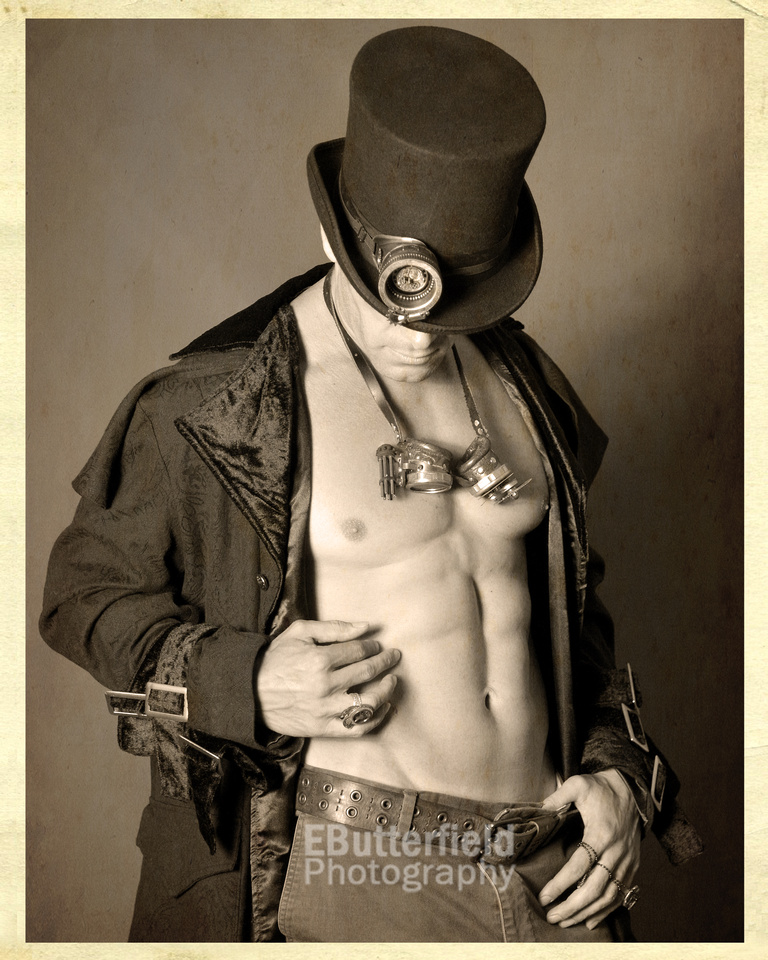